Speaking Out: Gillette and Wyoming Rally for Coal at Listening Session

Speaking Out: Gillette and Wyoming Rally for Coal at Listening Session

Via The Gillette News Record:

When it comes to fighting for coal-powered energy, the most dangerous opponents are the undead regulations, like the Clean Power Plan.

That was the message from Richard Reavey, vice president of public and government affairs for Cloud Peak Energy, during a pro-coal rally Tuesday morning in advance of a marathon EPA listening session on the planned repeal of the Clean Power Plan.

With the agency, at the direction of the Trump administration, already having suspended the Obama-era regulation on emissions from coal-fired power plants, some may think the plan is dead, Reavey said.

If that’s true, “why are we here today?” he asked. “We’re here to establish a strong administrative record.”

Just because the plan is on hold doesn’t mean it’s dead, he said. Like in a horror movie, supporters of coal need to make sure the monster can’t come back to life.

“This vampire rule is in its undead state,” Reavey said. “If we don’t kill it now and make sure it can’t come back to life … it will be brought back to life by another administration.”

Reavey was among a handful of public officials and coal mining interests to speak at the rally, which drew about 200 people packed into the mezzanine at the Gillette College Technical Education Center. The rally was a collaborative effort with the Wyoming Mining Association, Friends of Coal and the National Mining Association.

When it comes to the future of the Clean Power Plan, it needs to be fully buried to make it more difficult to resurrect when the political climate in Washington, D.C., changes, Reavey said.

“Drive a stake through its heart,” he said. “It need never come back to haunt us again.”

More than just killing the Clean Power Plan, Tuesday’s rally and listening session are an opportunity for Gillette and Wyoming to be heard, said Gov. Matt Mead.

“Where did we go wrong?” he asked rhetorically about the perception that coal has to be dirty and harmful to the environment.

Innovation now is as important as it was during the Industrial Revolution, he said.

That same innovation is happening in Wyoming with CO2 emissions at the Integrated Test Center, a planned CO2 pipeline that will run through the state and other research efforts in Campbell County and with the University of Wyoming, he said.

“There is a direct correlation between how well mankind is doing and access to affordable energy,” Mead said.

Along with the governor, Wyoming’s U.S. Senate delegation also rallied for coal and against the Clean Power Plan.

Sen. John Barrasso got the rally started by saying that those who want to eliminate coal from the nation’s energy portfolio are “living in a cocoon of self-delusion.”

He said there’s a place for renewable and other alternative energy sources, but that a mixed balance is needed, not one source at the expense of others.

“We need it all,” he said, adding that the United States owes a big thank you to Campbell County and its coal miners.

“No. 1, thank all of you,” he said. “Thank all the people of this great community for providing affordable energy to the American people, and nobody does that better than Gillette.”

He said a clear message that leads to the final retirement of the Clean Power Plan will help reverse what was under President Barack Obama eight years “of punishing regulatory rampage.”

Tuesday’s rally and EPA listening session comes on the heels of a U.S. District Court ruling in Montana that effectively halts any expansion of coal or oil exploration in the Powder River Basin.

The ruling piggybacks on a Bureau of Land Management rule implemented near the end of Obama’s administration that says the BLM must also account for the potential environmental impacts of burning fossil fuels taken from public lands.

U.S. District Court Judge Brian Morris ruled the BLM didn’t consider the potential environmental impacts in 2015 when it approved plans to add acreage to the basin’s coal, oil and gas exploration in Wyoming and Montana.

Mead said Tuesday he is aware of that ruling and already is working on a legal response from the state.

“I’m eager to be talking to the attorney general about what options we have on that, because it didn’t look like it was friendly to coal,” he said.

While ruling against coal, oil and gas on the expansion plans, Morris denied a petition by a conglomerate of environmental groups to also shut down the coal mining and oil activity already going on in the PRB.

An order to stop mining and pumping oil would’ve been “disastrous,” Mead said.

“That part of (the ruling) was good,” he said. “We’re grateful he didn’t stop — I mean, can you imagine stopping all coal here? It’s just another example, as I’ve seen in the last 7.5 years, where you have to be constantly diligent.”

He said the fight to protect coal as a viable, affordable energy resource “is on all the fronts. It’s on regional haze, it’s on (the BLM climate change rule), it’s all of these things.”

Travis Deti, executive director for the Wyoming Mining Association, said events like the rally or showing up to speak at federal listening sessions are important and shouldn’t be discounted as a waste of time.

In the Church of Climate Change, It Is Time for Heresy 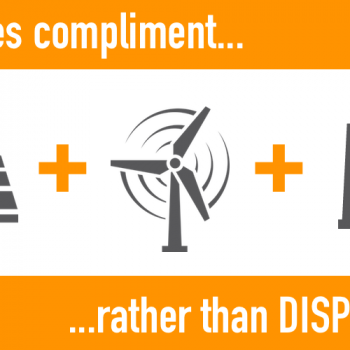