Reliable Energy Production is Too Important to Risk

Reliable Energy Production is Too Important to Risk

Via The Kansas City Star:

What to do about the Clean Power Plan, or CPP, which has been hanging around in bureaucratic limbo since the closing days of President Barack Obama’s administration? Obama considered it the centerpiece of his climate agenda. But the Supreme Court issued a stay against its massive costs in 2016, and then President Donald Trump’s administration announced a halt to the plan last October.

Voiding this massive regulation is no easy matter. There are procedures aplenty to deal with, including a lengthy process to either withdraw or replace it with a modified effort. Whatever the administration decides, it will be sued. And plenty of interested parties are ready to weigh in on what to do next, which explains why the Environmental Protection Agency is holding a hearing this Wednesday in Kansas City. The daylong meeting will solicit comments from industrial groups and environmental activists on how to approach future emissions of carbon dioxide, or CO2, from America’s power plants.

As the EPA comes to Kansas City, two considerations should be paramount: consumer costs and reliability of our electrical grid.

First, let’s be clear about what the CPP would have meant in real-world terms. According to a study by Energy Ventures Analysis, the CPP would have forced Americans to pay $214 billion in higher energy costs by 2030, with wholesale electricity in 2020 rising by more than a third above 2012 levels. The average annual household utility bill would have increased by $680, and 45 states would have seen double-digit increases in the cost of electricity.

Constructing new power plants and transmission lines was projected to cost $64 billion. And all this to theoretically reduce global temperatures 0.018 degrees Celsius by the year 2100.

Second, the power plants that would have been shut down were some of America’s highest performing and most critical power stations. Yes, coal-fired power plants were on the chopping block under the CPP. But most of these plants now run clean, thanks to high-tech “scrubbing” systems that trap sulfur, mercury and particulate emissions.

However, CO2 — a greenhouse gas — remains the catch-all here. So it’s helpful to remember that the CPP was also projected to lower global power sector CO2 emissions by less than 1 percent.

There’s also grid reliability to consider. So far in 2018, we’ve seen tough stretches of brutal winter. And during this frigid period, the nation has relied on sturdy coal and nuclear plants to keep homes warm and lights on. In contrast, portions of New England that lack coal generation hit worrying low points in January with oil and natural gas supplies to their power plants. Other utilities there saw power grids taxed to the max just to keep electricity flowing.

As the EPA considers a rewrite of the CPP, it seems sensible to support an “all of the above” energy strategy that joins coal and nuclear with both natural gas and renewables. And it’s logical to expect advanced technologies like supercritical steam-generator boilers to allow for highly efficient coal usage with lower CO2 emissions. That provides a win-win: ensuring affordable and reliable power when Missouri needs it most, while lowering emissions for a safer environment.

Electricity is a necessity, and living with unreliable electricity could have life-threatening consequences. As the EPA revisits the Clean Power Plan this week, it should consider the technological advances that can make cleaner coal plants a shared foundation for Missouri’s and America’s power grid.

The Iliad – A CPP Parable for Our Time 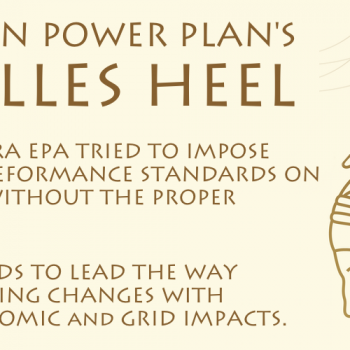