How High Will Obama’s EPA regulations Drive Your Power Bill?

How High Will Obama’s EPA regulations Drive Your Power Bill?

Within the next 15 years, electricity consumers in every state — which means just about everybody in America — will be paying as much as 25 percent more than they’re paying now, thanks to President Obama’s war on coal.

The Environmental Protection Agency’s Clean Power Plan, which aims to reduce power plant carbon dioxide emissions by 32 percent — mainly by setting standards that no coal-fired plant can meet — would cause double-digit rate increases in 40 states, according to National Economic Consulting Associates (NERA).

In a recent study on the long-term effects of the EPA’s climate plan, NERA forecast “annual U.S. retail electricity rate increases range from 11%/year to 14%/year” through 2033, and, “[f]or the overall economy, losses to U.S. consumers range from $64 billion to $79 billion on a present value basis over the same time period.”

An economic impact analysis carried out by Energy Ventures Analysis (EVA) is even more dire, predicting “[d]ouble digit wholesale electricity price increases in 46 states,” including increases of 25 percent or more in 16 states.

That study, backed by the mining industry, found states in the central and eastern U.S., where coal-fired plants abound, would see the greatest cost increases. West Virginia would be hardest hit, with a projected increase of 29.8 percent. 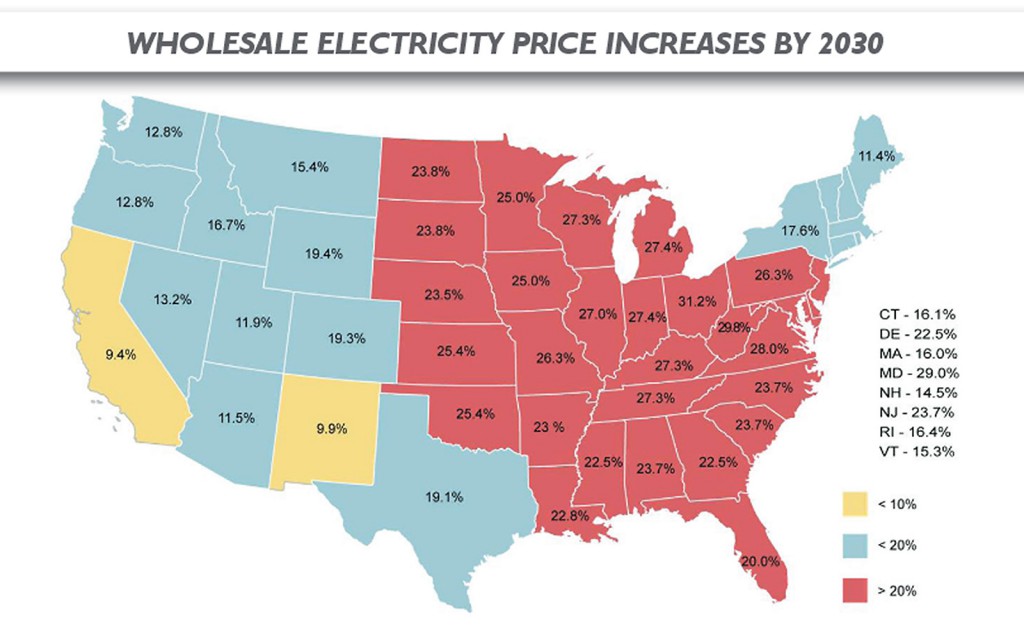 EVA also noted that the government appears to have willfully discounted the collateral costs of implementing the rule. “The findings of this analysis suggest EPA has substantially understated the CPP’s [Clean Power Plan] costs to consumers in at least three ways,” the report lists:

“[T]he standard set by EPA cannot be met by any existing plant in the coal power generation fleet,” the report states. That’s a crippling standard, since coal “has historically been the largest source of the nation’s base load (24/7) electricity generation and remains so today.”

So far, 26 states have joined in a lawsuit to bar the EPA from implementing the CPP rule and to have the rule overturned. In the meantime, those states are warning the Obama administration not to make any long-term international climate commitments it can’t keep, should the rule be struck down.