The move, expected in the coming weeks, would open up a legal battle by contesting the authority of the Environmental Protection Agency on a wide range of grounds, some of them little explored by the courts.

The EPA issued the regulations last week under a seldom-used section of the Clean Air Act. The agency also is confronting a legislative oddity from 1990, when Congress updated the clean-air law but inadvertently enacted differently worded House and Senate amendments that are relevant to the EPA’s carbon rules. How courts interpret the amendments could determine whether the administration’s power-plant rules survive.

Additional legal challenges will focus on whether the agency exceeded its powers by pushing utilities to shift to cleaner forms of energy instead of just focusing on pollution controls at fossil-fuel-fired power plants.

The paucity of legal precedent on the Clean Air Act provision behind the carbon rules, known as Section 111(d), has some upside for the EPA, giving it flexibility to be creative with power-plant oversight, Mr. Profeta said. “The challenge, of course, is [that] without decades of precedent there is some question about how courts will apply it. It’s a two-edged sword,” he said. 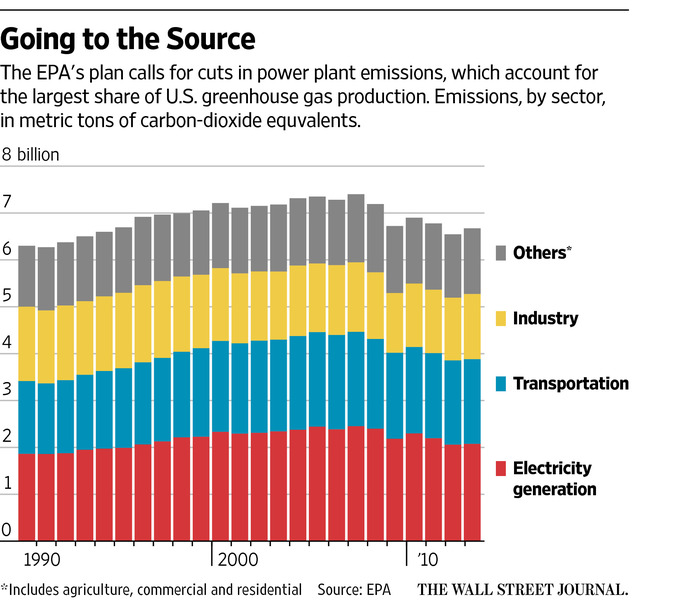 The EPA rules, in the works since 2013 and the cornerstone of President Barack Obama’s climate agenda, call for a 32% cut in power-plant carbon emissions by 2030 based on emissions levels of 2005.

“The legal foundation for this rule is laid out in great detail, we have responded to comments in a transparent way and we are confident that it is consistent with the law,” EPA spokeswoman Melissa Harrison said.

The EPA has used the law’s 111(d) provision only a handful of times since it was enacted in 1970, and never for a pollutant on the scale of carbon dioxide. The EPA in the regulations said lawmakers meant the provision to fill gaps in other clean air programs by covering “a wide range of air pollutants—including ones that Congress may not have been aware of at the time it enacted the provision.”

“We believe in this final rule the EPA is trying to convert itself from an environmental regulator to a central planning authority of states’ energy economies,” said West Virginia Attorney General Patrick Morrisey, whose office is leading a coalition of states that plan to challenge the rules in court.

Mr. Morrisey said he hopes to persuade 20 or more states to join the coming lawsuit, and anticipates filing related litigation challenging concurrent EPA rules for future power plants. He also said the state was working with coal miners and business allies that also are planning lawsuits.

Another group of states, led by New York and Massachusetts, support the regulations and pledged to back the EPA in court.

The differing House and Senate amendments from 1990, which address potential double regulation, could be crucial to the case. Challengers say the amendments mean the EPA’s carbon rules are barred because the agency already regulated power plants under a different section of the law for different pollutants.

The EPA disagrees and says the amendments mean the exclusion doesn’t apply when the agency is regulating a different pollutant than what it regulated previously.

The EPA’s final rules included some changes from the original 2014 proposal that could help it defend against certain lines of attack.

For example, the agency removed a component focusing on energy efficiency in homes and businesses from its formula on targeted emission reductions. Utilities had expressed concern, telling the EPA they can’t control how efficient customers are with their electricity. The agency acknowledged in the final rule that the energy-efficiency component didn’t fit within its traditional implementation of the Clean Air Act.

“It’s fair to say that was a place that would have attracted a lot of legal fire,” said Sean Donahue, a Washington, D.C., environmental lawyer who has been working with the Environmental Defense Fund to support EPA’s position in court.

An early test will come when challengers ask a court to block implementation of the carbon rules while the litigation proceeds. Courts consider several factors when deciding whether to grant such requests, including whether the challengers are likely to win and whether they will be irreparably harmed if the rules go into effect during the court battle.

The EPA’s supporters point out the agency gave states two extra years to comply, undermining the case for a stay.

Challenges to the EPA regulations go straight to the U.S. Court of Appeals for the District of Columbia Circuit, a court that regularly reviews government regulations. A final legal decision, possibly after appeals to the Supreme Court, could come after Mr. Obama leaves office.

In the run-up to the legal battle there have been some twists that could factor into the case. One came when the Supreme Court in June upheld the legality of nationwide health insurance subsidies. While the Obama administration won the case, the court declined to give deference to the administration’s interpretation of an ambiguous provision in the Affordable Care Act.

Lawyers close to the power-plant case believe challengers will try to use the ruling to convince judges they don’t owe deference to the EPA, at least on how to interpret the House and Senate amendments.

The Obama EPA for several years built a winning streak in the courts, including on its earlier rules limiting greenhouse-gas emissions from automobiles. The agency, however, recently has suffered two notable setbacks.

The Supreme Court in June ordered the EPA to reconsider rules requiring power plants to cut mercury emissions, because the agency didn’t properly consider the cost. And last year, the high court faulted the EPA for claiming power under a greenhouse-gas permitting program to regulate small emitters in the future, a ruling challengers plan to cite in the new case.

“Over the past six years, the courts have upheld the EPA’s air rules far more often than not,” said the EPA’s Ms. Harrison. She also said a 2011 Supreme Court ruling made clear the agency had authority under another section of the Clean Air Act to limit carbon pollution from facilities like power plants.

KY Buyer's Remorse On CPP: This Is Not What We Thought We Were Buying